"So first things first, as much as I love this bedroom this isn't the room we made the record in. We had done some in Timmy's basement but most of it in the apartment that Taylor and I had shared. However, recording in my room has been at the core of my process with addy, whether it was old EPs, demos, or tracking for the Eclipse record. 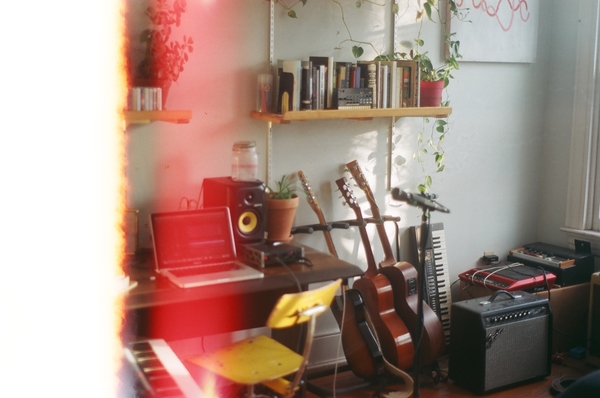 All the nice mics are Taylor's; two that we used a lot for the record are the Coles 4038 and a pair of Oktava Mk-012's. I fell in love with this Coles mic in particular and wanted to capture just about everything with it, I really gravitate towards that thicker, warmer sound.

The pictures show two very important keyboards to the album. Lying upright against the wall is the little Casio (Casiotone MT-205) that I programmed the Planted beat on. The other is a Korg MS2000 which was actually a gift from my friend Kevin who does all our album artwork. I think every keyboard / synth sound on the album came from that guy.

Also important is the old Roland Rhythm 55 drum machine I bought when I started addy as a solo venture, played most songs with an accompanying beat from it which continued even with a full band. The song Strawberries has a underlying “Rhumba” beat from it.

The guitars in the photo are on most of the songs as well. my acoustic (Martin Custom X Series) and my electric (G&L ASAT Special)

There's a lot of "we used ___ for almost every song" which is partly due to necessity, no ones rich here we play on what we have. However it also leads to a very cohesive sound I think which is what I strive for in an album. There are other ways to achieve this of course but I love when an album feels like you could live inside it. 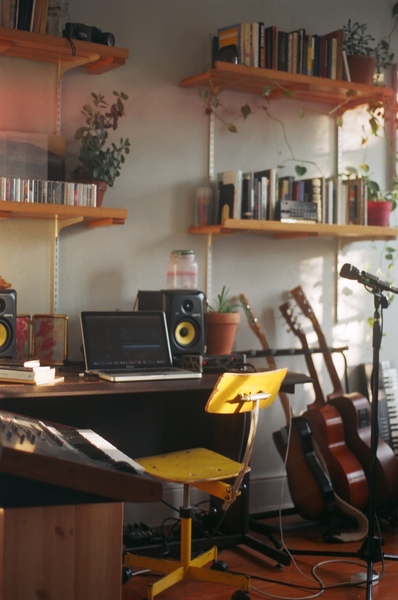 There are plenty of other things in my room though that shaped the album beyond the instruments themselves. I like to collect tapes of the bands that I've played with, I've gotten worse at this as time goes on but some that I put on the most are: Fire is Motion, Blue Ranger, Water From Your Eyes, Hovvdy and Twain

I can be pretty bad at taking care of plants but I love them so much, love sharing my room with them and seeing new growth.

I can be even worse at consistently reading but I go through spurts (currently in one and hoping it never ends!) Just finished the first of Elena Ferrante's Neapolitan Novels, I love growing with characters, love the way she writes with such poignancy, about love and friendship. I remember at the time of writing these songs I was really into reading Maggie Nelson and Anne Carson who I still consider to be two of my favorite authors of all time. Still writing songs from The Argonauts inspiration. Among the books are an array of journals half-filled with stray thoughts and songs, mostly finished/just discarded, I hate not finishing a song even if it's bad.

Across the desk there are a couple of sentimental knick-knacks including the little deer on my monitor, that was my great grandmother's. The two-fold paintings were a gift from my partner Daire, I think they know my infatuation for the color red. Red has stayed a pretty consistent theme for me since I started this project. I always visualize colors when listening to music and red continues to strike me in such a visceral way. I think having that constant visual component only furthers my hope in creating something one can live or get lost inside of." 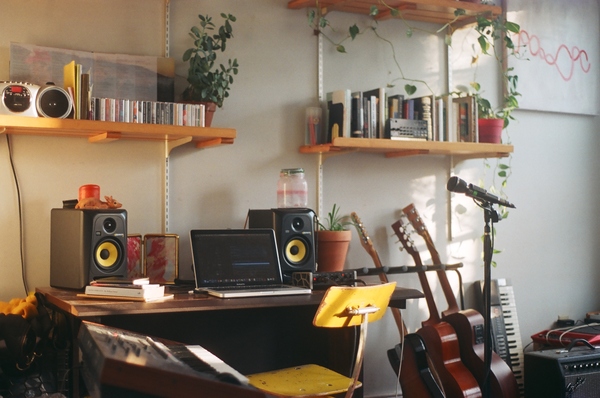 a hand-picked mix of addy merch and related titles. view all →