"The Tower" is the fifth and final single to be shared before the release of The Rose Gardener, the forthcoming full length record by Bellows. Stream it here a day ahead of its full release on all your favorite digital and streaming platforms, and read about the track below. 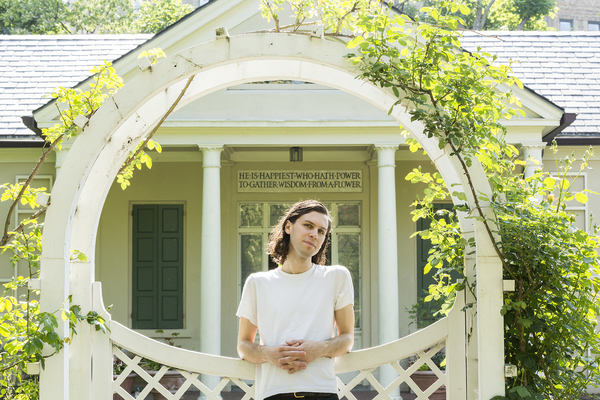 "'The Tower' is partially based on an interpolation of the song 'WTF' by Gabby's World, the other band I'm in," says Oliver Kalb of the penultimate track from his forthcoming record The Rose Gardener. "Those first lines are about the experience of hearing 'WTF' and having a memory of the power of touring in a band and singing someone else's beautiful songs night after night. In a moment of extreme chaos and conflict in my life, the context and meaning of the song changed for me. It suddenly felt like a rallying cry to stick with music despite it feeling like a hopeless endeavor: 'I will not back down.'"

It suddenly felt like a rallying cry to stick with music despite it feeling like a hopeless endeavor: ‘I will not back down.’

Though not an expert in tarot, Kalb concedes that the title is a reference to the tarot card of the same name. "The Tower in tarot symbolizes upheaval and change; the image on the card is literally a tower being struck by lightning. We build up towers of worldly ambition and narcissistic insistence on our own constructed images of ourselves. These towers of careerist striving, however, are built on faulty foundations – we have to destroy the towers we build up if we really want to change ourselves, or get out of the ruts we're in."

Kalb explains further that the triumphant and hopeful song "is a declaration of defiance against a seemingly insurmountable obstacle, the recognition that although everything in my life seemed to be crumbling away, that nevertheless making art and continuing to live my life despite hardship was the most important thing. But that realization came with a caveat: that if I was going to continue with art, I needed to fundamentally change myself, and my relationship to having a life in music. 'Deep in the stars, or wherever you are, I need to find you' – these final lines, sung in the same pitched register as the quotation from 'WTF' are about the universality of music, how hiding somewhere deep in the universe is a primal force we can sometimes tap into to create beauty, and to rise above the pettiness of earthly experience. Art is the only thing that connects us to something higher than ourselves, and I need to live life in search of something greater than me."

The Rose Gardener is out via Topshelf Records on February 22, 2019.