PLEASE NOTE: because of an unforeseen issue with our mail order fulfillment partner, this item will not be able to ship until February 2023. Thank you!

Drawing on influences of jazz improvisation, minimalist composition, and punk rock ethos, the Boston-based band Really From dismiss traditional genre and formulae in favor of explorative, indie rock amalgamations. Since 2014, their ever-evolving sound has incorporated stylistic touchstones from math rock to ambient, exploring themes of place, self, and culture through a dialect entirely their own. Michi Tassey (keys, synth bass) and Chris Lee-Rodriguez (guitar) exchange vocal leads regularly, shifting perspectives and ranges as their songs cascade through varied musical worlds, refracting their thematic questions concerned with intergenerational trauma, tokenism, and immigrant parenthood. Trumpeter Matt Hull and drummer Sander Bryce often take on lead voices of their own, further reconfiguring traditional notions of genre and songwriting.

“Try Lingual,” the lead single from Really From’s self-titled and third album, sees the quartet at their most all-encompassing. Thematically, it’s an apt setting for exploring Lee-Rodriguez’s personal struggles with learning Spanish, and Tassey's with Japanese, in order to better communicate with their families and communities. At first calm and collected, then brassy, chaotic, and disjointed, “Try Lingual” is wrought with the anxiety of struggling to keep up. Tassey and Lee-Rodriguez sing as foils to one another, as if to encourage the other to unlearn their self-blaming habits. Trumpeter Hull’s jazzy sensibility often sings in unison with his melodic counterparts, but when let loose between and around the beats, Hull’s calculated, eruptive wailing mirrors the eureka moments that abound when trying to learn a new language, as well reflecting the less conclusive and more challenging hurdles that come with learning a new tongue. Like a linguistic epiphany, new worlds are revealed. Previously impossible conversations become accessible. Yet the learning persists, and other doors remain to be opened. Really From are especially adept at bending their somewhat unusual instrumentation of trumpet, keys, guitar, and drums into both abstract and intentional forms. On the album’s second single, “Quirk,” a warm swell of synth welcomes listeners into a bouncing, odd-timed exploration of inherited trauma, qualities, and laughter. Underscored by JD Beck-like flourishes of drummer Sander Bryce, the opening 5/8 groove builds unpredictably, but with a precise foundation for Lee-Rodriguez’s lyrical unpacking of intergenerational trauma. While “Quirk” might not offer definitive resolution to its raised questions, its lines are punctuated with poetic acceptance—“As you sow your seed / I’ll reap from everything that stays.” “Your father knew this / your mother did too / the fault’s not on them.” These reflections on identity permeate the entirety of Really From, whose name is drawn from a question often thrust at the band’s mixed raced members—"where are you really from?" The foreboding phrase conjures a complex web of daunting subject matter, but it’s nothing new to the band. It is their lived experience, and so it is woven organically into their emotive, jazz-inflected experimental rock fabric, crucially blurring the line between the Personal and the Political. The raw vulnerability of this substance melds fluidly with the band’s collaborative spirit, so much so that they called on dear friend and former bandmate Sai Boddupalli to produce the album. The band describes Boddupalli’s efforts as “putting the album where it needed to be,” adding a newfound cohesion and vibrance to the intricate group effort that is Really From—a candid, kinetic album of unbound style.

a hand-picked mix of Really From merch and related titles. view all → 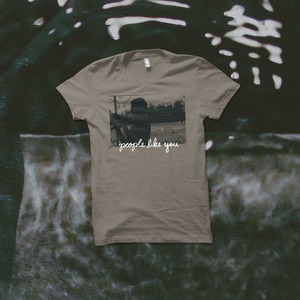